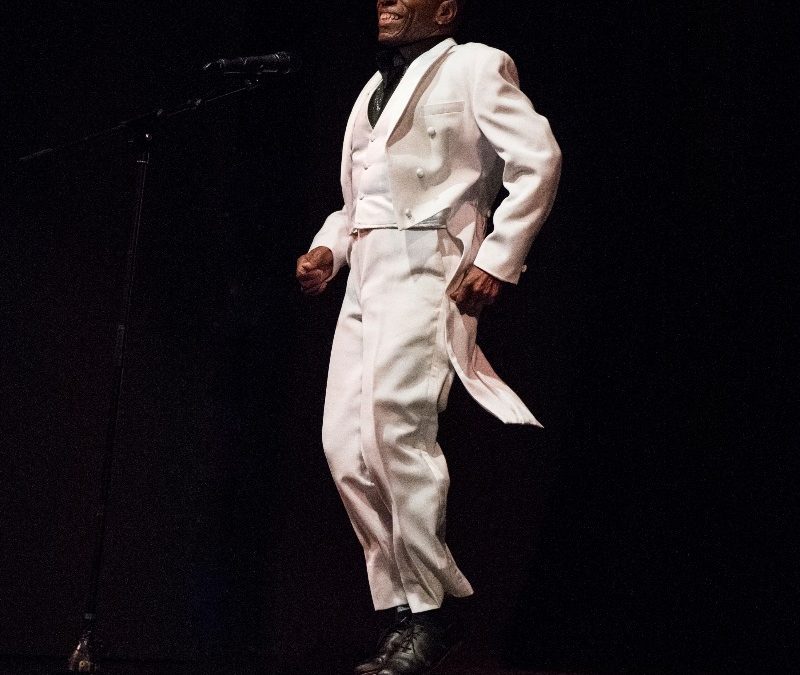 A real American Music Story. As told by A living legend! 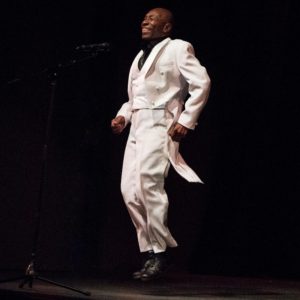 Let Movin’ Melvin Brown take you on a Black Music journey (50s-90s) through his incredible and fascinating life in song, tap dance, story & comedy.
★★★★★ “A rare treat. Make the most of it!” The Age 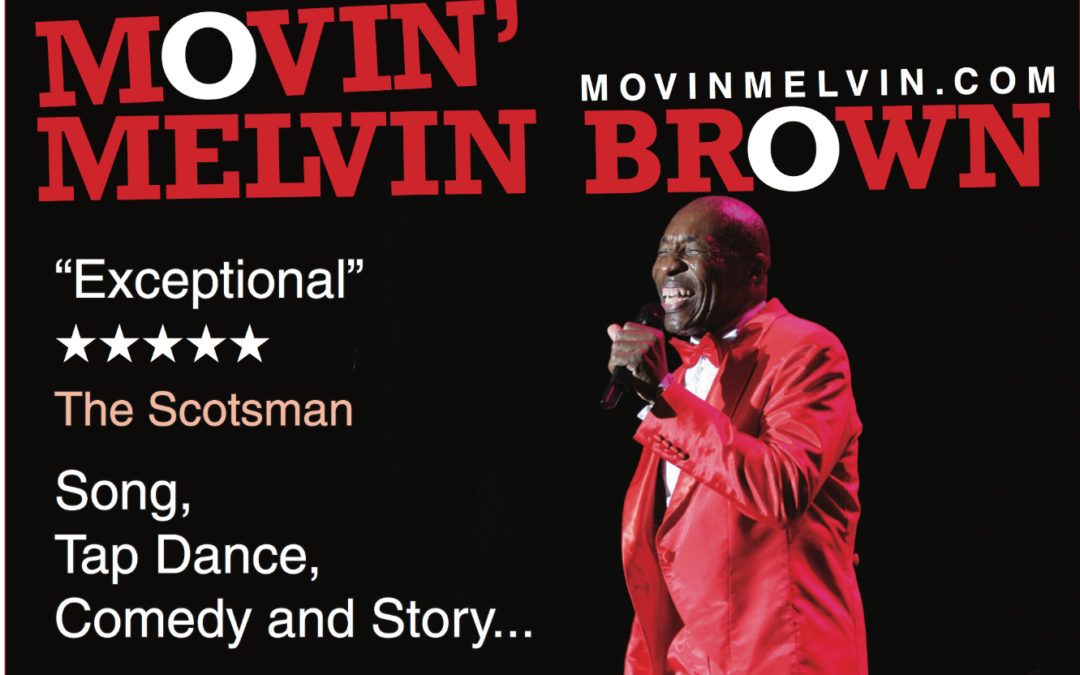 ‘The last of the great Song & Dance Men’

“The audience hang on his every word, warmly laughing along with his rich chuckle and there’s even a chance to get up and have a dance with the man himself”
★★★★★ Frodo Allan

“He was an absolute delight to watch”
★★★★★ – BBC, Edinburgh Festival Revue

A LIVING LEGEND. Not to be missed!

A Festival favourite, Brown is a flamboyant wizard of song and tap who has been seen widely on BBC & ABC, was the featured artist at Oprah Winfrey’s birthday party for Maya Angelou and has earned critical acclaim from reviewers across the world

Described as ‘The last of the great Song and Dance Men’, his award-winning entertainment career spans 5 decades of singing, tap-dancing, storytelling and laughing with the best.

The show has sold out in Edinburgh, Edmonton, Vancouver, Adelaide and many other Festivals around the world, earning several awards including ‘Audience Pick’ for best show in Toronto and Vancouver, ‘Outstanding solo Performer’ in New York and Ottawa, ‘Best international Act’ in Brighton UK, and more.

“Brown was born to perform”
★★★★★ BroadwayBaby

Born in Cincinnati, Ohio, he has been at the heart of the black music scene since he started stealing hearts with his dancing aged five. He had a doo-wop group as a teenager, when Cincinnati was the hub of black music, and has worked with the likes of James Brown, BB King, The Isley Brothers, Little Stevie Wonder and many more. Right now Brown’s own single Love Stormy Weather is in the UK soul charts and is available on a 45 vinyl. 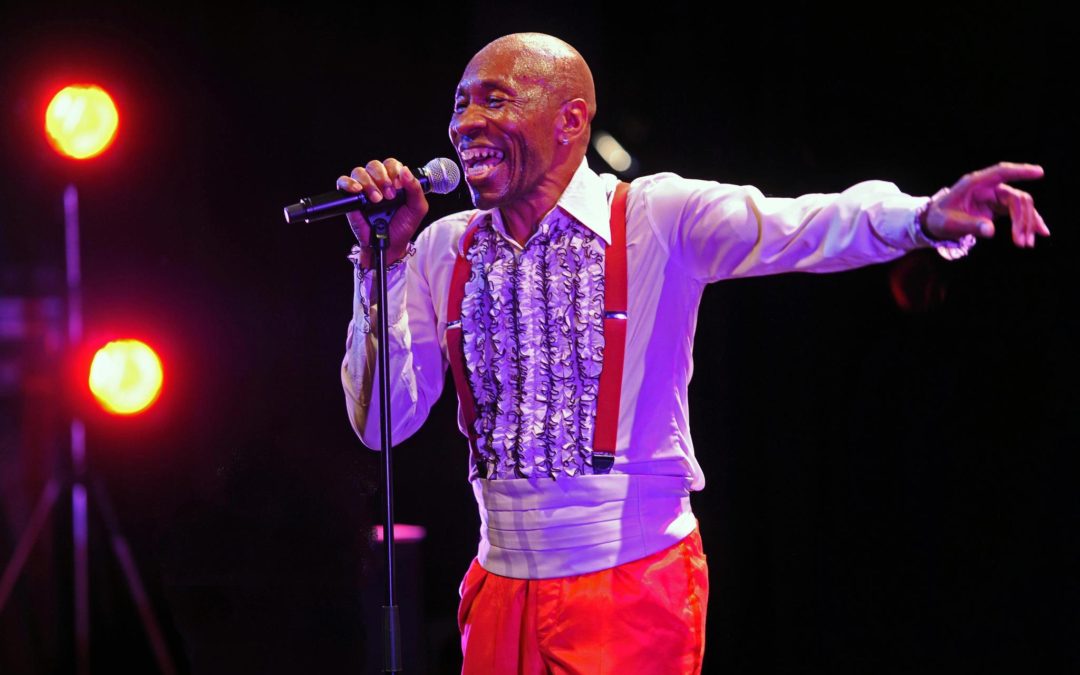 I Love You Day Project

The first “I Love You Day” Concert was realized in Sydney Australia!
On February 2nd.2002, we found a part of the world willing to come together to say: “I Love You”. 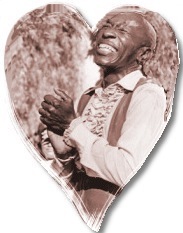 About I Love You Day:
I just want the world to stop everything for a few moments, to say: “I LOVE YOU”.

The Mission:
Together we will all shift the consciousness of the planet to love.

The Event:
I want the world to stop and watch as I perform three songs, ending with everyone watching everywhere in the world and all saying together: “I LOVE YOU”. This is a positive world event for everyone! WILL YOU HELP?

Movin’ Melvin Brown is singing, dancing, tap dancing… this is just a little delightful taste of the great entertainment which comes from the roots of “Soul” and R&B. See also www.myspace.com/movinmelvin 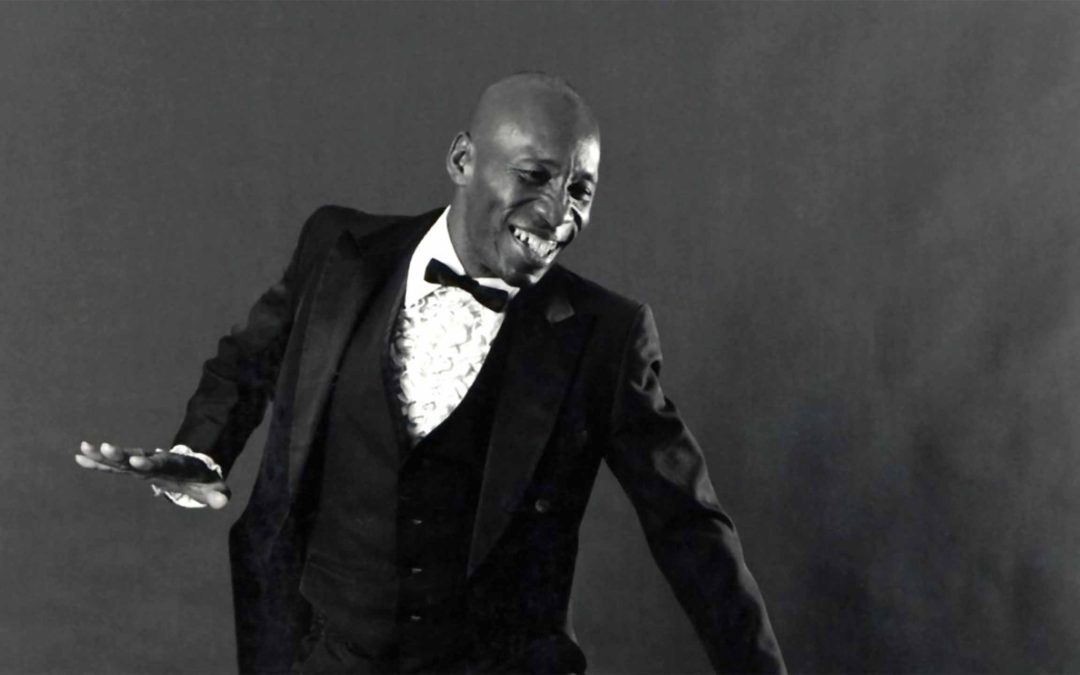 Melvin Brown, or Movin’ Melvin as he is better known, has had huge success with his highly entertaining and energetic show, A Man, A Magic, A Music. Showcasing snippets of Melvin’s career and life., the show has had rave reviews around the world. Since he was a small child, Melvin knew where he wanted to go with his life.

“On my first day of kindergarten the teacher asked if anybody could dance and I replied that I could. I’d only seen my sisters dancing but figured I could do it too. When the rest of the class yelled and clapped, I knew what I wanted to do from that point on.”

His singing came from his church years where, typical to the Hollywood portrayal, the gospel churches rock and rolled their messages into parishioners. During his early years, there was a lot of black music around but nobody would play it on the radio and it wasn’t until the ’50’s that a surge of black music started emerging.

“The ’50’s was one of the most creative times for music in history. The Temptations, Wilson Pickett, The Miracles – people were wondering where all these people came from. From that point on. I was inspired and got a band together and started touring.”

Melvin has worked with the likes of Willie Nelson, and James Brown and has performed for Oprah Winfrey as well as opening for Harry Connick Jur on his Australian tour. After touring, setting up a singing telegram service in Texas, helping the homeless and working with a male revue, Melvin started work on his own homeless project called Change This World Project. He has written books on philosophy and psychology, recorded four CD’s and busks and performs around the world to raise money for his project. He also has his own website – www.movinmelvin.com which provides further information on the man and his project.

For the meantime, in his first Adelaide Fringe, Movin’ Melvin is enjoying responsive and appreciative audiences who foot tap and clap their way through countless musical favourites while learning a little bit about music, a a way of life from the ’50s to today.